Last week, Alison told you about the process of creating and submitting her designs for HeART to Heart. In the second part of her blog series, she tells you about how she took these designs from paper to the final sculptures out on our trail this summer.

“In last week’s blog, I talked about coming up with the designs for the hearts. This week I want to show you how I went about turning these designs into the finished products.

These hearts have been made by the very talented Aden Hynes of the Sculpture Studios in Basildon, Essex. He made the moulds and cast the fibre glass hearts. Later this year his team will release a video of their process from cutting the heart shapes through to the finished pieces. I will let you all know when that comes out, but if you want to find out more about what his business does, do take a look at his website, https://www.sculpturestudios.co.uk.

To begin with I gave each heart a quick wash just to get them ready as although they arrive having been painted white, a few coats of white gesso or undercoat gives a stable surface on which to apply the painted layers.

I also said that I would give you a glimpse of fibre glass figures I have worked on previously which were all decorated to help raise funds for charities and each of these has also been treated in the same way.

Had I not taken part in these earlier projects I doubt that I would have become involved with St. Catherine’s Hospice and the amazing team which works so tirelessly to bring an amazing level of care to people who need them. 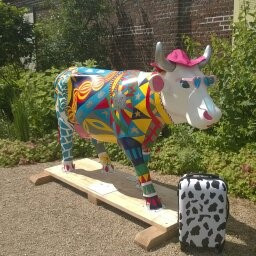 So my history with painting these things started in 2015 when I submitted a design to decorate one of the cows with the Surrey Hills Cow Parade.

I had never considered doing anything like this before but a friend suggested I submit a design, which I did, and I was selected. I also agreed to decorate a mini moo ( smaller version) which was used on the Surrey Hills Cow Parade promotional tour.

This is Jess the larger (life sized) cow, who spent the summer of 2016 in the walled garden of the beautiful Painshill Park.
The sponsors decided that as she was on her holidays, she should have a sunhat, sunglasses and her suitcase. Jess was auctioned off later in the year at Sandown Racecourse and raised £3,500 for a local Surrey charity. 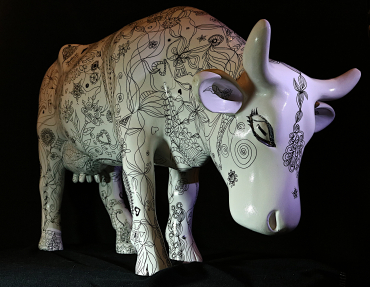 The mini moo (unnamed as yet) was used as I said as part of the promotion tour and then children were allowed to colour her in. Unfortunately, there was a misunderstanding somewhere along the line, having done the design I was told that someone would varnish her, but this didn’t happen, so when she was wiped down after each event, the drawing was slowly removed. She was in a sorry state when I bought her but my £450 was added to the “funds raised” pot. I plan to repaint her later this year.

Not long after having finished Jess, I was contacted by a former mayor of Haslemere who asked if I would take on decorating a Hog for the 2017 Haslemere Hog Parade. Specifically, I was asked to produce a Sherlock Holmes Hog as the sponsor was/is the owner of a special needs school called Undershaw. Undershaw School is located in the house which Arthur Conan Doyle built for his wife. From memory this piece raised about £600. 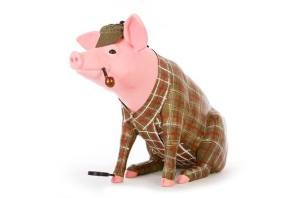 I really enjoyed making this piece and he is one of my favourite pieces, he just turned out really well.

The following year, I was asked to decorate a 5ft tall hare for the same town. This time it was to raise money for Motor Neurone Disease Research with the Scottish Rugby player Doddie Weir in mind as he sadly suffers from this horrible condition. 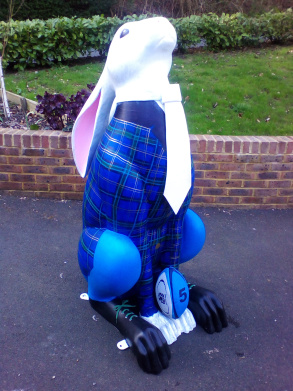 Being such a large piece, it took a very long time to complete. There was a list of requests which went along with this piece: The Weir Tartan was to be used; a place for 62 signatures was required, as Doddie Weir was capped 62 times for Scotland; and the number 5 was to be visible on the piece.

What I didn’t know was that during the time I was painting the hare, the Weir tartan was changed. No one told me. It certainly didn’t occur to me that something like this might happen, so when the hare was collected it was not received with as much delight as I had hoped for. I made a detachable tie so that signatures could be collected, and the tie properly attached in time for the auction. There were other problems, too. The Motor Neurone Disease Society did not want to get behind the piece, nor did the Scottish Rugby Club. So where the organisers were hopeful of lots of support for the piece, none was forthcoming. I still do not know if the piece has been sold. 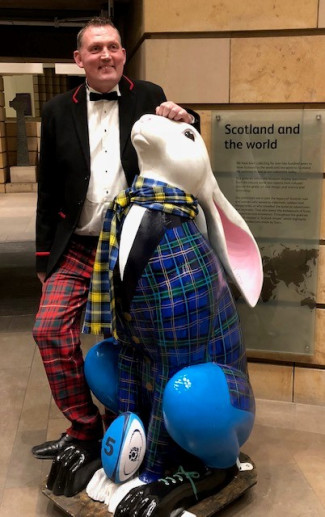 The only recent news I have is that a couple of people drove the hare from Surrey to a dinner in Scotland and managed to get a photo of it with Doddie himself. The scarf wrapped around the hare’s neck is the new tartan design. I don’t know what happened to the ties or if any signatures were collected. I do hope that the piece can, has, and will raise money for them the Hare Parade organisors and they wanted to donate the funds for research into finding a cure for Motor Neurone Disease. Hopefully at some point I will find out. 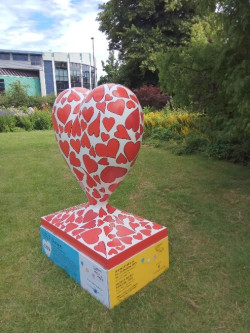 I had only just handed over the hare when I was contacted about taking part in the St. Catherine’s Heart campaign.
I submitted in total the 10 designs I shared in last week’s blog. And you will already have seen the finished pieces. But here I wanted to share some of the stages the pieces go through as there is always a horrible stage when making any kind of art I find, the point where many people give up, but if you keep going then all will come good.

Just to let you into a little secret, this heart, called Doreen, is my favourite, but don’t tell anyone. 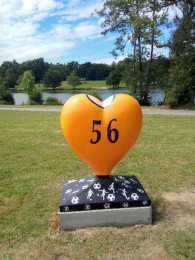 It was a pleasure to decorate this piece in memory of Jackie. The shirt colour caused me loads of problems. I was given an official Three Bridges F.C. shirt so that I could colour match it. Being a nylon football shirt, it changes colour as it moves, so I made it slightly streaky to give an impression of the changes in the fabric. It all worked out well in the end, I feel. 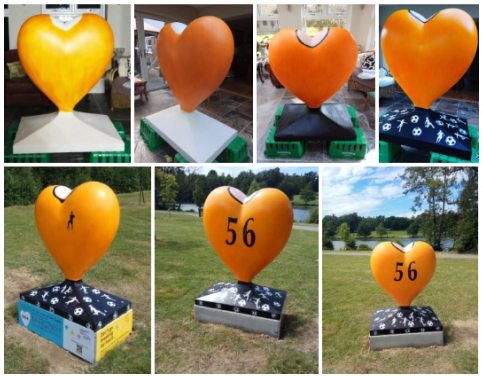 This one might be one of the current favourites but she was a hard one to do.

She was like bringing up a petulant teenager. She was ugly and difficult from the off, the 2D drawings just didn’t want to work on a 3D heart and I almost wished I hadn’t started her. She really looks bad. 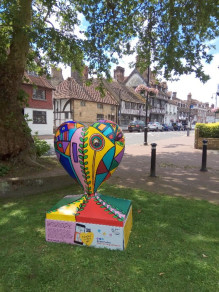 It was only really once I had started to put the detail on this piece that it all started to come together, and I started to like her.
Even at the end there was a problem with the varnishing which almost had me in tears. It just wouldn’t dry properly without dragging the paint layers down the heart. Gravity was not my friend. It did mean that I had to be very careful when painting the varnish on and in the end it all worked out OK, everyone seems to be happy. 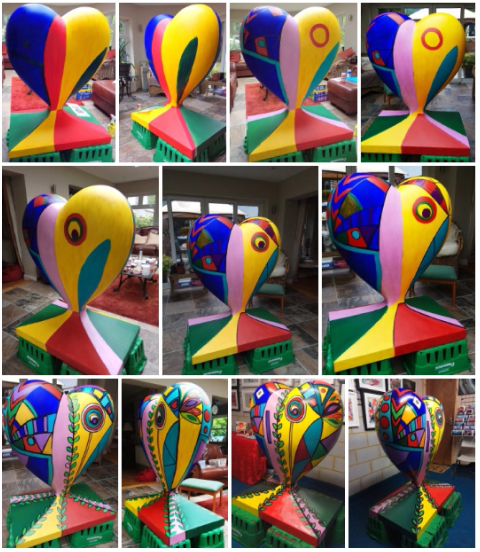 All the hearts were given three isolation coats. This is to protect the paint before the varnish is applied on top. The reason for doing this is that varnish on any painting is not intended to stay there forever. It is simply there as a removable protector. By putting down an isolation coat first, if the varnish needs to be removed because someone decided to deface it, the painting underneath is protected making it much easier to remove the graffiti and varnish, and re-varnish without the painting being affected.

All 26 hearts are due to be auctioned off later this year and it is hoped that they will raise a large amount of money to go towards the building of a new hospice facility.

I will keep all my toes and fingers crossed that they will raise lots of money and I promise to report back after the event.
If you would like to visit all the hearts on the trail, just click here to see the map of where the hearts are and lots of other information too.

I was asked to appear live on the local news in Crawley Memorial Park where Doreen is located. Click here to see the interview.”