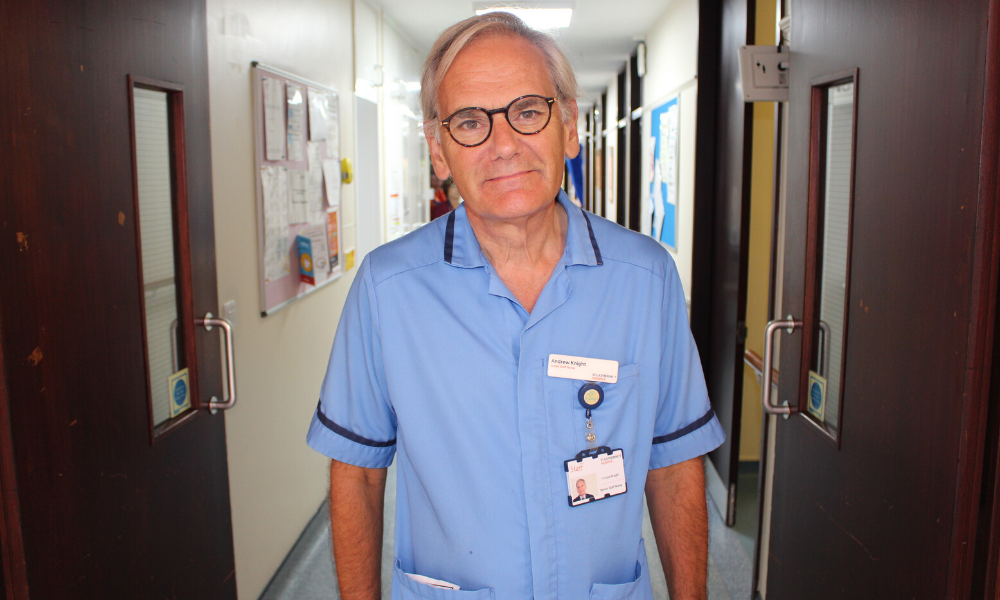 “I’ve worked at St Catherine’s for four years but I’ve worked in hospice care since 1992.

I’ve even worked alongside Dame Cicely Saunders, who is known as a founder of the modern hospice movement. It’s possible you’ve met me if you know someone who has received our care.

As well as caring for patients I care for their loved ones and relatives. Dealing with relatives is often challenging, but it’s the part of my job I find most rewarding.

We have drugs to help patients deal with their pain, but relatives have their own particular problems and being at the hospice is a new experience for them. It’s often their first time here and a lot of people are frightened and very angry. You can see it in their faces.

Caring for families is the essence of a hospice.

Hospice nursing isn’t just about giving out drugs and managing pain. It’s about getting alongside people and bonding with them. Sometimes that means acknowledging that things are awful, sometimes that’s giving them permission to step away from a bedside, and sometimes that’s guiding them through the practicalities after their loved one has died.

I was with a patient recently and their family were all piling into the hospice with haunted looks on their faces. I went over to them and it all went quiet. It was like they were panicking about what I was going to say. This family thought their loved one was literally on his last breath, about to die. I sat with them and said ‘I think there’ll be a tomorrow.” They hadn’t even considered that.

As a nurse, it’s important to use your expertise to help people to pace themselves. It’s tiring sitting by an ill relative’s or friend’s bed and sometimes you have to give people permission to leave. I reassure people it’s okay to leave to have some food or a shower.

I chat with people about how they’re feeling.

And the people I look after often stay with me. One lady I cared for had teenage children. She was very upset, angry and frightened about her future and the fact that she had to say goodbye to her children. She often told me that things were “awful.” I knew they were so I’d tell her how sorry I was that I couldn’t take things away.

I did what I could to try and cheer her up though. Whenever I took her medication to her, I drew smiley faces on the waxed cups her pills came in. When she was having a bad day, I drew a sad face. When she was feeling cross, I drew a frustrated face. I tried to draw each face to match her mood. To make her laugh, but also to say I’m alongside you. My silly doodles never failed to make her smile. To see her mood brighten meant the world to me.

What I didn’t realise was that she was keeping the cups with my drawings on. When she died, her sister discovered them. She told me she will always keep them as a special memory and thanked me for drawing for her sister.

I’ve recently gone through my nursing revalidation and the reason I’m still at St Catherine’s, at a time that I could retire, is because of the terrific people here. Not just the people I care for but my nursing colleagues too. There’s a tremendous sense of family and camaraderie here, of fellowship and belonging.”