In News and Blog Posted 24 June 2022
“Disability isn’t a weakness. Having a diverse workplace makes us stronger as a workplace, but also as people”2022-06-242022-06-24https://www.stch.org.uk/wp-content/uploads/stcatherines-logo.pngSt Catherineshttps://www.stch.org.uk/wp-content/uploads/2022/06/emma-ms-awareness-banner.png200px200px

“Disability isn’t a weakness. Having a diverse workplace makes us stronger as a workplace, but also as people”

24 April – 1 May was MS Awareness Week, raising awareness of multiple sclerosis (MS) an autoimmune disease that affects the brain and spinal cord. In MS, the coating that protects the nerves (myelin) is damaged. This causes a range of symptoms like blurred vision and problems with how we move, think and feel.

MS is unpredictable and different for everybody. Symptoms can come and go and change over time, and it’s difficult to know how the condition might progress. That’s why this #MSAwarenessWeek, the focus was on the uncertainty of life with MS.

We spoke with Emma, our Philanthropy Assistant who was diagnosed with MS in 2017.

“I had a few symptoms when I was growing up; I was really clumsy as a teenager, always tired and went through periods of having pins and needles. I was very active – I did dance and drama and I just assumed that I was tired because of that.

Then I had my appendix removed and lost some vision in my left eye. This had happened to me previously after minor surgery, so at first, they thought I had an allergy to the anaesthetic.

Then, about two weeks after surgery, I was in the bath and lost complete control of the right side of my body and had a really aggressive spasm.

I went to see an emergency GP as that’s obviously not a normal thing to happen, and she actually told me that her alarm bells for things like MS weren’t ringing.

The spasms continued for another two months, and they got worse. I was having spasms every single day – the most I had was eleven in one day. I couldn’t do anything when they were happening, I just had to lay on the floor and wait for them to stop.

It was meant to be an amazing experience – I’d planned the whole trip, paid for it and was ready to go, but my parents told me that they wanted me to be checked out by a neurologist before I left.

This was the same week my grandad died

I went to my grandad’s funeral and at that point, still didn’t have a diagnosis. Sitting at a funeral with your family, where everyone around you is crying and you’re thinking that there’s a possibility that you’re dying is really traumatic. It was probably the worst experience of my life.

After the appointment with the neurologist, I’d googled ‘what is MS?’ and, based on my symptoms, essentially decided that I had it. I couldn’t let myself think that I had a brain tumour. I was scared; at the age of twenty-one I didn’t really know much about MS, but I knew a brain tumour could be fatal.

I researched MS so much that I was on the MS Society website 24/7 for two weeks straight. I decided on my treatment plan, I knew my whole journey with this disease before I was even officially diagnosed.

I went for my MRI, and they told me it would take a week to get the results

Within twenty-four hours they’d called to say they’d found something. I remember being told that I needed to go and see the doctor on Saturday and asking what time. They told me whatever time I could do, the doctor would be there. That’s when I realised it wasn’t going to be good.

The doctor actually called my mum in first because he was so nervous: I was the youngest person he’d diagnosed with MS at that point. Just a few years before I was diagnosed, they’d thought it was a disease for people in their thirties or older and had only recently started to realise that actually anyone could get it at any time.

Looking at my medical history, he thought I’d had MS since I was eleven. I really struggled with that – how could I have not known?

How could you not know for ten years that you have a really serious neurological condition?

Living with it now, it’s quite obvious. I think that’s why I struggled so much; I felt so betrayed by my body and by myself for not knowing that I couldn’t look at myself in the mirror for months after I was diagnosed.

I always say that I survived 2017 rather than lived it

In the span of six months, I’d gone from graduating uni to being told I had a serious condition or brain tumour. Those twelve months were hell – I don’t know how else to describe it.

After I was diagnosed, I remember getting in the car and telling myself I could cry for one song and that was it. I didn’t want to feel, I just wanted to be numb.

Therapy helped me come to terms with what happened

I was a shell of a person at the end of that year, and it was therapy that helped me put myself back together. It’s the reason I can talk about it now.

I hadn’t told anyone my diagnosis story aside from my immediate family who already knew.

I wasn’t ready to talk about it whilst it was so raw. I’m much better at being open and vulnerable now – I no longer see vulnerability and emotions as a weakness. It feels good now to have people know what I went through.

Every single day, there will be something that is a symptom of my MS. Usually it’s brain fog, slurring my words, stuttering or using the wrong words. I have problems with my balance, I’m clumsy, but it can also range to more severe symptoms like pins and needles, spasms or I’ll lose feeling in my limbs.

Fatigue is probably the biggest one for me – some days I’ll be okay and other days I’ll be so tired for no reason. I could sleep for fifteen hours straight and still be fatigued, or sleep for two hours and be completely fine. It’s so unpredictable and that makes it hard to plan what I’m going to do as I just don’t know how I’m going to feel day to day.

I have relapsing and remitting MS, meaning it can be triggered by something. For me, that could be heat, the cold, or being unwell. There are a whole bunch of things I have to constantly think about managing.

Not everyone is the same, it presents to everyone differently. My trigger can be temperature, but for somebody else it wouldn’t be. That’s why it can be such a difficult disease and it’s why it’s hard to diagnose for a lot of people. Everyone manages differently and it’s all about finding what works for you.

It’s not about comparing; it’s about being less alone

I’ve been sharing content on my Instagram throughout MS Awareness Week. I put up a video talking about my experience, and a lot of people have responded saying thank you, and that they could relate to it. I think just making people feel a little less alone helps.

I think people are more honest now, but when I was diagnosed, people weren’t open about it or what the realities of MS are actually like. Now, working at the hospice, we’re surrounded by stories of families and people who’ve been diagnosed with terminal illness – I take a lot of strength from that. If they can talk about it, then I can talk about what happened to me.

I’m not ashamed of being disabled

It took me a long time to use the word disabled as I didn’t really feel like I was, but I’ve always been open from the minute I was diagnosed and am not afraid to use the term now.

Disability isn’t a weakness. Having a diverse workplace makes us stronger as a workplace, but also as people. There’s always a place for disabled people and by me not saying I’m disabled, I’m not helping to stop the stereotype.

If talking about my experience helps someone to feel less alone, to change someone’s perception or to make people think differently about things, then I think it’s important to talk about it.” 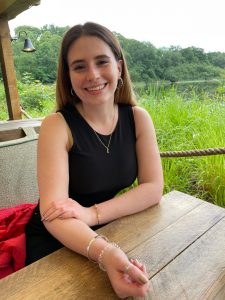 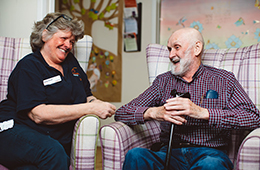