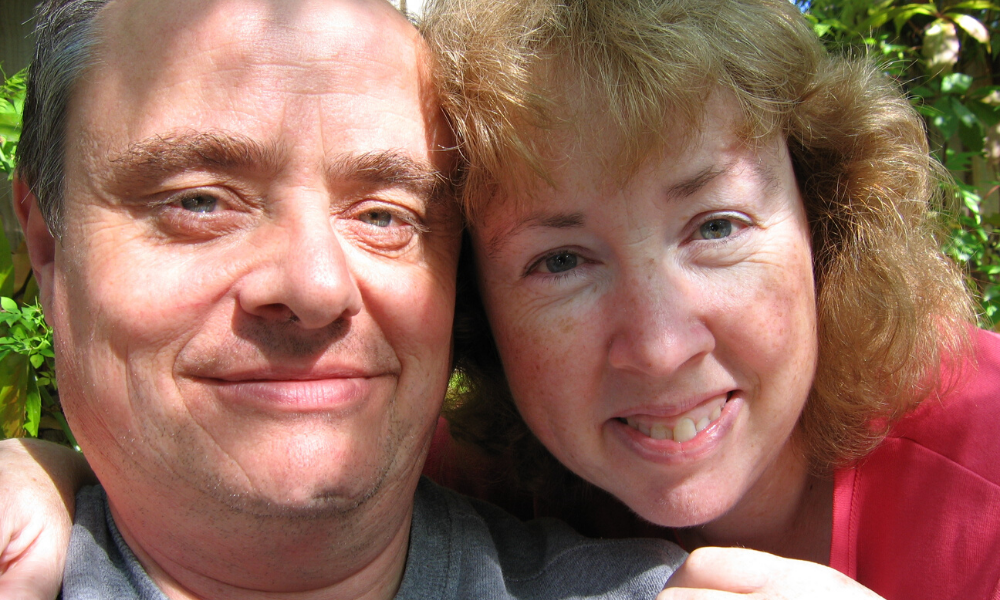 I’d never really known my life without him

“My husband Dave was loved by everyone. He was a family man, and caretaker at a local school, but he still found time to volunteer as a first responder ambulance volunteer and a Street Pastor. I was immensely proud of all he did.

It was Christmas 2014 when Dave slipped at work and hurt his leg. When his pain persisted Dave went to hospital for some scans. And in March 2015, we were given the devastating news that he had stage four kidney cancer. Even then Dave didn’t lose his positivity and joy. He had surgery but when he became unwell again we discovered his cancer had transferred from his kidney to his bones, lung and spine.

We concentrated on making the most of the time we had.

Doctors couldn’t tell us exactly how much time we had but we focused on making memories. And as Dave’s illness progressed St Catherine’s helped us prepare for his wish to die at home. As time went on pain overtook Dave, so it was decided it was best that he came to the hospice.

Arriving at St Catherine’s felt like walking into an oasis.

Where all I had to do was be with Dave. I didn’t need to worry about caring for him like I had been at home. I could just treasure the time we had together. Everyone was so warm and caring and everything was taken care of.

We enjoyed the hospice’s homemade cakes and wandering around the garden, and I regularly stayed with Dave overnight. Our vicar, Anita, gave Dave communion at the hospice too, which brought us both peace.

One night I asked Anita to stay overnight at the hospice. St Catherine’s had never had a vicar stay before but they welcomed her with open arms. And we sat next to Dave talking, praying, and holding his hands.

As well as spiritual support I had counselling too.

Dave and I were married 37 years. I’d known him since I was 14 so I’d never really known my life without him. I hadn’t wanted to consider what I’d do after he was gone but my counsellor allowed me to think about life without Dave and how the end might be.
When Dave died, our daughter, Hannah and I were there holding his hands

It was such a calm, peaceful ending. And the nurses were so respectful. The next morning we came back to the hospice as Hannah wanted to see her Dad. Hannah’s autistic, which means things are often very black and white for her, and she needed to know that her Dad wouldn’t be left at the hospice. The nurses were brilliant, answering her questions and reassuring her.

Hannah really struggled to cope with her Dad’s death.

But St Catherine’s Patient and Family Support Team were amazing and adapted their care to help her. Through play therapy, and game playing, Hannah, was able to articulate in her own way how she was feeling. That was hugely helpful for her and me.

I don’t know how my family would have coped without St Catherine’s. Without them Dave’s end of life would have been traumatic for us all. So when I hear that only one in three people are able to have the hospice’s help it’s devastating. Everyone deserves a peaceful ending like my wonderful Dave had.”